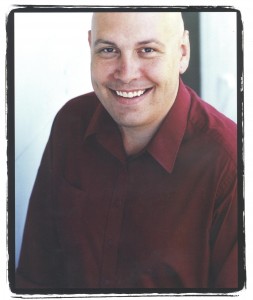 Guy T. Simpson, Jr. was born in Grays Harbor Community Hospital on the hill overlooking Aberdeen and Hoquiam, Washington and the majestic Pacific Ocean. He was a shy, socially timid child with a penchant for art and reading. His early years were marked by multiple moves from one town to another, galvanizing his introverted nature.

He began his school career in the Seattle Public School system, before moving to Hobart, and finally back to Cosmopolis (all in the first grade). School was an adventure for him, it was ripe with new learning opportunities, but also a minefield of social activities and bullying. During second grade, his family moved into the Central Park area, and he formed his story-telling roots. Early stories included the super hero driven, “Super Five,” and the many adventures of “Yug.” His family moved once more into Hoquiam, where he began to blossom, but as fate would have it, they moved again to Vancouver, Washington during the middle of his sophomore year. Nearly giving up on education, he trudged onward, his writing took off, and his adventures of “Yug” was even featured in the school newspaper (The Chieftain Chant). Then, near the middle of his senior year, his family moved south to Hemet, California, where he graduated.

It was in Hemet that he began to win numerous awards for his artwork and illustrations. After graduation, he held a plethora of jobs, many of them concurrently, and gained a wealth of technical experience. He wrote his first screenplay, “Amuleti” the first installment of the “Powerstar” saga. He had some rough economic times during the 1980s, finding himself homeless in the deserts of California more than once. After traveling through much of the United States, he headed back to California in the summer of 1987, where he met the woman he would marry in the summer of 1988. Inspired by his creative genius, she encouraged him to return to school with hopes he would become a teacher. In 1990, their first child was born, and they graduated together from Mt. San Jacinto College.

Moving back up to his ancestral home of Washington State in 1990, his family grew with the birth of a second daughter, and son. He finished his undergraduate degree in animation and environmental science from The Evergreen State College in 1995. A few more jobs, in the game design, restaurant, and professional wrestling fields eventually led to him getting his Master’s degree in education from The Evergreen State College in 2005. In September 2005 he began his new career as a middle school science teacher.

Through the years, his storytelling was always there, from the horrific “ELG’s,” to the chronicles of “Geowulf Sharpstone.” But there was always one story that had haunted him since 1978, the saga of the “Brotherhood of Olympus,” an epic ten part story, that he attempted to write numerous times, from different starting points. Then came his wife’s diagnosis of colon cancer, and the realization that he needed to be intentional with his passion to tell stories.

During the summer of 2011, in an incredible two and a half weeks, he wrote the entire first draft of the “Brotherhood of Olympus and the Deadliest Game.” Now with it’s release, he has begun the transition to the next phase of his journey.