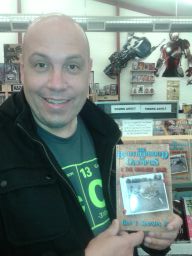 The author holding a copy of the Brotherhood of Olympus and the Deadliest Game off the shelf at the store.

The upcoming author appearance/book signing event at Gabi’s Olympic Cards and Comics is being covered by a variety of local media, including the web-based, Thurston Talk news forum and community information source.  Check the link to see the story.  ThurstonTalk.com

Local novelist and middle school teacher Guy Simpson of Western Washington, will debut his young adult fantasy/horror novel “The Brotherhood of Olympus and the Deadliest Game” with an author appearance and book signing at Gabi’s Olympic Cards and Comics on Saturday, April 13, 2013, from 12:00 to 5:00 PM. 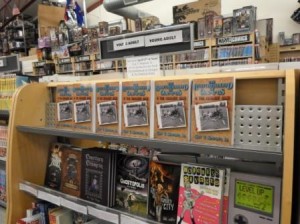 The top shelf of the new YA Book section of Olympic Cards and Comics is filled with the Brotherhood of Olympus and the Deadliest Game.

Originally scheduled to debut the novel with an author appearance and book signing at the recent Ridgeline Middle School Bingo for Books event, Simpson was unable to attend the event due to unforeseen circumstances.  Simpson, a science and leadership teacher, award winning artist and illustrator, and member of the Pacific Northwest Writers Association, has been working on the Brotherhood of Olympus saga for over thirty years while collecting extensive research for the myth, legend, and art that lies as the foundation of the tale. 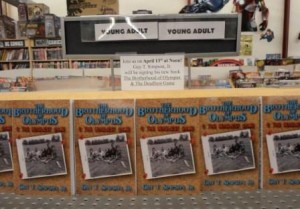 The top shelf of the YA Book section at Olympic Cards and Comics.

The author appearance and book signing also signals to debut of the new Young Adult book section inside the largest comic and game store in the region.  Store owner, Gabrielle Shephard-Trautmann, was excited to add this new section to her busy store.   She said, “Some of my customers asked for us to carry young adult books, and I’m very supportive of the community.”  When asked about the author appearance, Shepard-Trautmann added, “We’ve had many writers and artists at Olympic Cards and Comics over the years to do signings, Guy Simpson is the start of a new chapter for us bringing in authors outside the comic industry.  He is also part of our community, being a local author, and I love to support the community.”