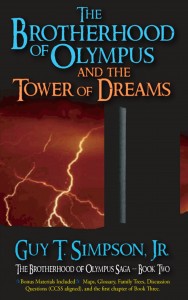 Part Two of the Brotherhood of Olympus Saga.

The Brotherhood of Olympus and the Tower of Dreams.

Three months have passed since the Fraser brothers defeated the demons who caused the death of their uncle.

United by the struggle they founded the Brotherhood of Olympus.

Now a war of mythological proportions looms on the horizon…  And the original Brotherhood is beginning to unravel before the even face the new dangers that await them.  As the leader, Drake must recruit a ragtag ensemble of social misfits to form the core of his new Brotherhood.

The dark gods are poised to strike, and a legendary tower that travels across different realities holds the key to their victory over humanity.  Only one thing stands in the way of their plan to unleash Hell on Earth…

The Brotherhood of Olympus–if they can survive high school, learn to trust each other, and become the heroes they were meant to be.

The Official release date of this book, through Mythic Publishing will be on September 22, 2015–On Drake Fraser’s birthday.