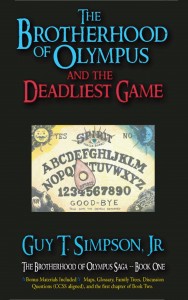 Book One of the Brotherhood of Olympus Saga

The first of a series of young adult horror/fantasy novels that tells the story of Drake Fraser, a painfully shy, intellectually gifted 13 year-old boy growing up in Aberdeen, Washington.

On a cold, gray Friday the thirteenth, his favorite uncle is killed in a horrible car collision with a logging truck. Drake’s life takes a sudden twist after the accident when his family begins to encounter haunting spirits that bring terror and doom upon them. He soon finds that he has unique gifts and abilities that allow him to fight the apparitions, and that there may be a greater sinister plot afoot.

But as Drake develops his skills to combat the ghastly specters, his oldest brother continues to use a Spirit board game that invites the evil into their lives. Drake must bring his brothers back together to fight the nefarious forces to save his family, and quite possibly the world.