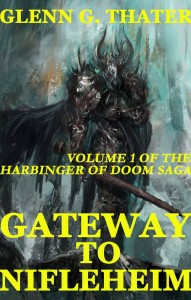 Gateway to Nifleheim was a tale I was very curious to read because of the mythology behind the story. It was a quick read, with a few grammatical errors (using “rode” in place of “road” for example). I wasn’t quite sure if it was meant to be a parody of more traditional high fantasy, or if the author was just going for camp. The protagonist in this tale is a mysterious man named Lord Angle Theta, yes that’s right, the trigonometric term for the unknown angle in a triangle. I know naming characters can be a daunting task, but Angle Theta? I secretly found myself hoping for more hidden math references as I read. I also found it suspect that the author included detailed descriptions of nearly everything, the noble house colors, the hues of armor and weapons, but could only say they bore the symbol of Erotrus upon their chests. What were these symbols and glyphs? It’ was almost like the author was afraid to commit to a theme, were they lions? Griffons? Dragons? Wolves?  By not including them he denied the reader the opportunity to relate to the noble house like many of the Game of Thrones fans do–think of how that series would’ve been different if all George R. R. Martin had included were references to the Starks and Lannisters by saying they bore the symbol of House Stark upon their breast, without ever saying it was a gray direwolf.

The use of the mythological back story kept me reading. But in the end I was still confused about whether or not I could take the protagonist seriously with his odd name. If you’ve never taken trigonometry before, and you think a mighty hero could be named Angle, then this book is for you.

Publication Date: November 29, 2012
Warning to readers: Gateway
to Nifleheim and the other books in the Harbinger of Doom series explore religious and political topics that some may consider highly controversial. Proceed at your own risk. The author has written that, “The nature of good and evil is explored in ways that led to the Saga’s banning for either religious or political reasons in much of Western Europe for centuries.”

Gateway to Nifleheim (approximate length 66,000 words) is a revised and significantly expanded edition of the first volume of the Harbinger of Doom saga, which was previously published as the novella entitled, The Gateway (length approx. 25,000 words).

When mad sorcerers open a gateway to the very pits of hell, releasing demons of darkest nightmare upon the world, only the intrepid knights of House Eotrus stand in their way. Claradon Eotrus takes up the mantle of his noble house to avenge his father and hold back the tide of chaos that threatens to engulf the world and destroy mankind. Claradon recruits Angle Theta and Gabriel Garn, mysterious knights of mystical power to stand with him. Theta and Garn take up their swords one last time against the coming darkness–a darkness from which only one will emerge.

The Harbinger of Doom saga centers around one Lord Angle Theta, an enigmatic warrior of unknown origins and mystical power. No mortal man is his match in battle. No sorcery can contain or confound him. No scholar or sage can outwit him. But for all his skills, he is but one of us: a man, a human, who shares our faults, our dreams, and our ambitions. He boldly strides across the land, fearless, peerless, and cloaked in mystery, all his will bent on righting such wrongs as he deems fit.

Until the day the Gateway opened and turned the world on its head. On that fateful day, Korrgonn came and washed away our dreams. And his infernal realms of Nifleheim set their unholy mark upon our world and claimed it for their own.

Only Theta and his companions see the enemies aligning against us. Only they foresee our end coming–the end of civilization, the end of the world of man. Only they can hope to turn the tide of madness and preserve all that we hold dear.

But no man, not even our greatest hero, can stand against the Lords of Nifleheim and the dark armies at their command. Fiends that infiltrate unseen within our ranks, that tear down our temples and our traditions, that devour us from within, unknown, unheralded, and unopposed until the hour grows far too late.

Through the murk and mist that hangs before our eyes, one man only sees true. One man pierces the veil of magic that blinds us all and marks the world as it truly is, revealing secrets, secrets of Angle Theta, so horrifying as to shatter a man’s mind and call into question the very nature of good and evil.