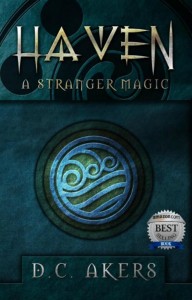 Haven: A Stranger Magic was a compelling read, but seriously lacked in page count. Just as the story began to take shape it ended. The protagonist Sam, is the stereotypical 13 year-old, 98 lbs. weakling and social outcast, with a mean-girl-esque older sister, Sarah, who might actually be the more complicated character. Sam hates his life. His father died when he was young and he has no memories of the man. His mother works double shifts at a diner to make ends meet and she has little time for her high school aged children.

Sam’s best friend and fellow social outcast, Travis, is the only one who tethers him to reality. Together the boys discover a secret in the old abandoned quarry caves outside town that shakes the foundation of what they know to be true. I found it hard to imagine that after the events in the cave the boys walk to Sam’s house and then Travis just walks home by himself. I would have thought they would have stayed together, since it was early summer.

The story then shifts to the perspective of otherworldly beings who begin to explain the backstory of who Sam and his family are, why they are there, and some foreboding about a Viper, that hunts them. And then it ends.

If the story was meant as a prelude to a bigger novel, or as part of a series of novellas that tell the larger tale it should have been advertised as such.

D.C. Akers crafted a workmanlike world where magic exists along the fringes, and the ordinary might not be so ordinary after all.

Publication Date: November 24, 2013
Sam Dalcome thinks he is so completely average that no one ever notices him. Until he discovers a mysterious stranger outside his home. Bewildered, he tries to uncover the stranger’s intentions. But Sam is sidetracked when he and his friend Travis discover a secret passageway deep in the town’s quarry that leads to a hidden cavern. What they uncover next will not only change their lives forever, but will uncover the first clue to a deadly Dalcome family secret. Sam finds himself drawn into a world of mystery and magic he never knew existed, which brings him closer to a destiny he never knew was possible.
HAVEN: A Stranger Magic is the first Novella in the HAVEN series by author D.C. Akers. This Novella contains 28,817 words, and about 172 pages in print form.HAVEN SERIES: Known as a place of refuge, Haven is a sanctuary for those with supernatural abilities. Decades of peace between the Witches, Vampires, Goblins, Elves, and Orcs is coming to an end. Now the once tranquil world is shrouded in deception and corruption. Dark secrets tear at the very fabric of their alliance giving way to an evil that stirs in the shadows. Exhilarating and utterly gripping, the HAVEN series is an action-packed journey full of suspense, magic, mystery, and intrigue.