So today is a very bittersweet day for me.  This day marks the 76th birthday of the man who was most influential in helping me become who I am today, my father, Guy T. Simpson, Sr.

My father was an enigma to many who knew him.  He was incredibly stubborn, not overly communicative with people, a bit of a butthead at times, somewhat difficult to like, and passionately protective of his family.  He was a role model, a guardian to watch over me and my four brothers, a champion of the obvious, and a master of the song–“A Hole in the Bottom of the Sea.”  He pushed many away with his gruffness, but could also shine as salesman in ways I could never mirror.

I never knew him when he was a youngster, where he struggled to fit in, he didn’t grow until near the end of high school and they didn’t have a uniform small enough for him at Montesano High School.  I never knew him when he was a young enlisted man in the United States Coast Guard, or when he married the love of his life after they met at the Harborena skating rink.  All of those parts of his journey were before my time.

I remember him when I was very young, pre-school aged, and I got the HONOR to go to work with him as he drove a bus around downtown Seattle.  I had a lunch packed, and got to sit behind him on his route, and I got to go down the aisle looking for a newspaper for him to read as we stopped for lunch.  I was so proud to be his child.  I recall, sitting and watching “Let’s Make a Deal” with Monty Hall, eating warmed up crinkle-cut french fries on a plate with ketchup, my feet not even reaching the end of the couch cushion–my Dad sitting by my side.

I remember not understanding why we were losing everything, after he was hurt on the job in a bus accident, not understanding why he was so angry all the time, as his livelihood was ripped out from underneath him, and the pain of the accident left him dependent upon prescription painkillers.  I remember the Christmas that almost wasn’t when I was in first grade, in the second of the three schools I would attend that very first year of my social experiment known as public school.  We were the recipients of an adopt-a-family program, and I saw the magic of hope upon my fathers face that Christmas.  The hope that if you try hard enough, keep to your beliefs, and refuse to give up, you would have at least a shot at making it to your dreams.

I remember him challenging the system to help us, when we had no where to go, and as a family we were not ‘part’ of the model for aid to dependent families.  When he told the state worker, that we had no where to go, and the DSHS employee told him there was nothing she could do, my dad did the unthinkable.  He turned to us, his five boys in that cramped little public office, and told us to go play because we weren’t leaving for a while, and we would be staying there.  That gambit, propelled by our obedience to our father as we scampered off in the office building, forced them to act, and we got public assistance without my dad having to leave his family.  He humbled himself in a way few can imagine to seek what we needed to survive.

I recall finding a common ground with him during the year that saw the birth of the Seattle Seahawks–through that football team we bonded, celebrating our pride in the region.  I knew I had found an inside mark on his good side, if I sat with him and watched the game.

I recall the summer before my junior year in high school, when he told me that I would not amount to anything if I just sat around writing and drawing.  He said, “No one is going to come knocking on the door, asking if there was an artist or writer living here and looking to make them rich and famous.  If you want to succeed in life you have to go do it, and not wait for it to come to you.”  Then he told me I needed to get a job, of course…  I went to work for Denny’s and my destiny was sealed.  Many of the stories I am now writing are based upon the people I met at Denny’s from that time period in my life, including a rather special girl, who foolishly stood up to me because of my behavior in the kitchen and within weeks she was swept off her feet, by a charm I never knew I possessed.  All of that would not have happened without that fateful day, and my dad telling me, “get a job.”

It’s funny I can’t recall what my fathers dreams were in life, what his aspiration was, or quite simply what he wanted to be when he grew up.  But, I do know what he did become.  He became my dad, the man I measure my successes in life against–and in my mind I will never fully measure up to him since he has become even bigger than life in my memory, a Titan whose shadow I can never match.  He also became the man who challenged my wife to like him despite himself, and they battled mightily in many things–including a particular game of cards, in the end he had succeeded far more than he dreamed, because she opened her heart and grew to love him.  Most importantly, he became the grandfather to my children.  I will never forget the pride on his face as he held each of my babies for the first time–in that moment I saw my dad the way he was long ago before he was damaged and scarred, I saw him as I once knew him on the couch with me dipping french fries into ketchup on a sunny Seattle afternoon.  If anyone knew my father the way I knew him, you could not help but idolize his singular presence, his unwillingness to bend, because you would understand the root of his passion–the love of his family, and his devotion to us, even though he struggled nearly all of his adult life in relating that to us.

As the tears flood my eyes, I think of my father on his birthday.  My father died in February 2004, nearly ten years gone by now.  There is not a day, where I do not at least think of him in passing.  I look at the things that have happened since he left this place, my graduation with my Masters degree, me becoming a teacher, my children graduating from high school, and one now from college herself.  He never got to see the Seahawks make it to their first Super Bowl in 2005, or rise meteorically to the top of the league like they are this year.  He never got to see his daughter-in-law win her fight against cancer, though I know he was with me when I refused to let her perish when she was so weak and the burden she carried was so great, or see my family break through the hardships and tribulations of that dark year.  Like my father before me, I stood and would not yield. 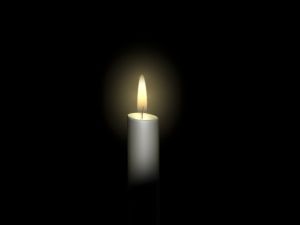 Every year since his death, I have lit a single candle on his birthday, and on the day he left us, to honor him.  To share my love of the man who forged much of me, in a simple fashion, as a light burning in the darkness.

So on this day, I share this candle with you all, in honor of my father.

May it forever burn brightly…

And I say to the ether, “Look Dad, I got a job, I’m a writer now…”  And I hope somewhere, there is a stern man, who is looking upon me, and as the pride rises within him, a smile forms upon his face.  And his voice echoes upon the winds of time, “I am so proud of you son, I always knew you could do it.”

I love you Dad…  Happy Birthday.