I have many thoughts about the just concluded Super Bowl that have clouded my mind for the last few months.  Back in August when the Denver Broncos came to Seattle to play the Seahawks during the preseason, many prognosticators touted it as a possible Super Bowl match up.  Both teams took it that way too, they played this game more like a regular season game, in fact the starters played longer in this game then they would normally have–Peyton Manning played most of the first half, and was behind 27-7 when he left.  The Seahawks continued to dominate the game of reserves after that, closing out a 40-10 victory.

Let me go back a bit further in time.  The year 1974, when the city of Seattle was awarded an expansion franchise to join the NFL in the 1976 season–the American Bicentennial.  The rumored team names waffled back and forth between the Kings–in honor of King County which was also the name of the first home of the team, the concrete behemoth known as the Kingdome, and the Pioneers.  The Kings became the front-runner, and my brothers and I, along with our neighborhood friends formed our own team–the North Bank Kings.  We lived in the neighborhood around North Bank Road in rural Central Park outside Aberdeen, Washington.  We played seven man, old school, backyard-tackle football against all comers, on our home field, the massive grassy yard of my distant cousins the Hilliard’s.  We won the Fifth Championship of Central Park, 77-63 over the aptly named Central Park Champs that hailed from across the highway in the Deer Park neighborhood.  That game was a mismatch, we were the plucky underdogs in our homemade reddish-pink outlined,  green numbered, white t-shirt uniforms, and they were the larger, faster, more experienced and older team.  I recall at halftime, as we trailed by two touchdowns, that it would be a good time for our parents to call for us to come home, forcing an end to the soon-to-be rout.  But during our short halftime, we found resolve in each other and pulled out the improbable come from behind win.

1    Gary Campbell, our center and defensive tackle–biggest guy on our team.

54  Guy Simpson (me), offensive line and defensive end, also the youngest player on the team.

77  Randy Simpson, our most explosive offensive player and hardest tackler.

80  Lynden Cooper, our second receiver and defensive back.

99  Norman Cooper, the oldest player on the team and jack-of-all-trades player.

That win was a highlight of my early life.  We would follow it up with a 63-12 victory in the Hoquiam Championship played in historic Olympic Stadium against the N Street Hawks.  By July of 1975, the official name of the expansion team was revealed and the Seattle Seahawks were born.

They played their inaugural year in the old NFC West that included the Atlanta Falcons, New Orleans Saints, Los Angeles Rams, and San Francisco 49ers.  They finished the year with a 2-12 record, but I loved them despite finishing last.  The Seahawks gave me a bond with my father, a man who could be gruff and difficult, quick to anger, and hard on his boys.  We found common ground watching the Seahawks play, and together we rooted for “our” team as father and son.   The Seahawks switched conferences after that first year, joining the Denver Broncos, Kansas City Chiefs, San Diego Chargers, and Oakland Raiders in the AFC West.  The closest our team came to the Super Bowl in those early years was in 1983 when they lost in the AFC Championship game to the Los Angeles Raiders.  Those were good years, and some of the last I  spent watching the team with my father.  I moved out in 1982, and my parents moved away by 1983 back to Western Washington.  My father and I didn’t watch more than a few games together after that.

He died in February 2004, two years before the Seahawks would make their first appearance in the Super Bowl.  I have never spent a day without thinking about my father.  I would not be the man I am today without him, or the influence he had on me as a youngster.  We didn’t win the Super Bowl, and it took a lot to heal from that wound.

But during the last four years I have seen something growing in the Northwest, a fever for the team of my youth–no, not the North Bank Kings, the Seattle Seahawks.  I believed they could make it to the Super Bowl in the 2012-13 season, but they fell short in Atlanta–never score too quickly and let Matt Ryan have an opportunity to win.  But in the off-season the team made some excellent moves, enhancing the defensive line, and bringing in the multi-talented Percy Harvin.  I looked at this team as one of destiny.  I watched what they did to the Broncos in the preseason and was reassured that it was all possible.

When the season played out, that destiny seemed to be coming to fruition.  My lovely wife and I attended the NFC Championship game and celebrated the Seahawks victory over the 49ers, I cried tears of joy for the history of the moment shared with the love of my life, and I cried tears of sadness for the man who I used to sit on the couch and watch this team with all those years ago.  I so miss my father.

I immediately went back to that game in August, that score defined the outcome I foresaw.  I could not see the Broncos getting more than 14 points, and saw the Seahawks scoring somewhere in the 40’s for a similar spread.  Though few agreed with me.  Prior to the game, I donned my stinky Earl Thomas jersey that I wore all season–I never washed it because the mojo was working, and I talked to my father.  This time, this one was going to be ours.

The game began with the safety, the ninth in Super Bowl history, and third during the last three games.  The Seahawks dominated on defense, holding the greatest offense in the history of the NFL to no first downs in the first quarter.  They opened a 5-0 lead, and I recalled the 5-0 lead the Seahawks had opened on the 49ers earlier in the season, and the outcome of that game.  Now, some have said that opening safety made the Broncos off their game.  But if you watched the NFC Championship, you saw the Seahawks fumble on the first play of the game and give up a  field goal to the 49ers.  But rather than crumble they slowly, methodically climbed back in that game and eventually took it over–that’s what champions do.

Over the course of the Super Bowl, I was so cautious not to celebrate the outcome until deep in the fourth quarter when the Lombardi trophy was being carried over to the Seahawks side of the field.  The scar of the 2005 season, and the stigma of watching something so dear be taken from you by blown calls, and an apparent agenda by the league to send one of its all time greatest players–Jerome Bettis–out on top, made me so 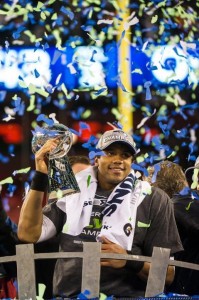 leery of this game.  Time and time again, the Seahawks would bust a big run, and it would be called back on a holding call mostly against pro-bowler Russell Okung, while on the other side, the Bronco linemen where literally tackling the Seattle defensive linemen, laying on them to keep them from Manning.  The officiating was not balanced, but like I tell the teams I coach, “You cannot rely on the officials to do you any favors or call anything right, in fact you need to be prepared to overcome bad calls, you must play well enough to not let the outcome be in doubt.”  Win it so big that the officials cannot alter the outcome.  The Seahawks did that, 43-8.  For part of the 4th quarter I thought they might be able to eclipse the record 55 point performance by the 49ers, but Coach Caroll let up on the accelerator and even put in the second string to finish the game.  He did not run up the score, even though he could have quite easily.

For all of those who aren’t fans of the sport, or sports in general, I give you this quoted dialogue from the 1985 movie Vision Quest, one of the best sports movies of all time:

Louden (Matthew Modine): “I was at the hotel, they told me you took the night off. Thought you were sick or something.”
Elmo (J.C. Quinn): “Of course I took the night off, dummy, isn’t this the night you wrestle Shute?”
Louden: “You took the night off for that?”
Elmo: “Yeah, shaved, got a haircut and everything.”
Louden: “You never took the night off to see me wrestle before, they’ll dock you for that.”
Elmo: “Hey kid, money ain’t everything.”
Louden: “It’s not that big a deal, I mean it’s six lousy minutes on the mat. If that.”
Elmo: “Ever hear of Pelé?”
Louden: “Yeah, he’s a soccer player.”
Elmo: “A very famous soccer player. I was in the room here one day. I’m watching the Mexican channel on TV. I don’t know nothing about Pelé. I’m watching what this guy can do with a ball and his feet. The next thing I know he jumps up in the air and flips into a somersault and kicks the ball in, upside down and backwards. I mean, the goddamn goalie never knew what the fuck hit him. (laughs) And Pelé gets excited and he rips off his jersey and starts running around the stadium waving it around over his head. Everybody’s screaming in Spanish. I’m here, sitting alone in my room. I start crying, yeah that’s right, I start crying. There’s another human being, a species which I happen to belong to, can kick a ball, and LIFT himself and the rest of us sad-ass human beings up to a better place to be, if only for a minute. Let me tell you kid, it was pretty goddamn glorious.  It ain’t the six minutes… it’s what happens in that six minutes.” 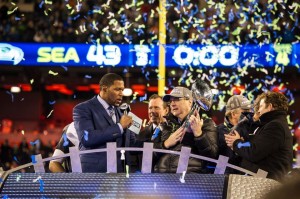 It was more than a game.  It was the match-up of the best offense in the history of the league against the number one defense of the season.  The Seahawks victory was the most watched Super Bowl, or television event, in its 48 year history, Twitter witnessed some of its highest traffic ever during the 12 second, 87 yard Percy Harvin kick-off return for a touchdown, and I cannot help but think Elmo would have said, something about it being, “pretty goddamn glorious.”

The victory brought solace to me, my family, and the spirit of my father.  I cried tears of joy, and only tears of joy, for on this day, my father celebrated the crowning of the new kings of professional football, the Seattle Seahawks, with me, my wife, and my children.