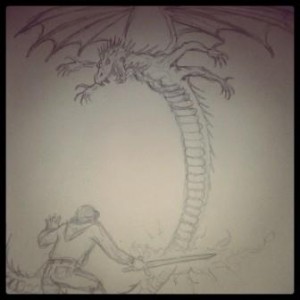 Currently on page 352 in Chapter 18 of the manuscript of the Brotherhood of Olympus and the Tower of Dreams.  One of the final pieces of the classic Brotherhood roster will be introduced in the next Chapter–Freeman Kalama, the shaman and eventual wizard of the group.  I believe having a strong Native American character in literature is a good thing, and Freeman is definitely that.  Scrappy will be joining the roster in the next few pages.  He has been infatuated with the stories Drake has already shared, and wants nothing more than to fight the ultimate monster or barbarian, to the death.  He may get his chance.

I have had some ask when David Halcomb is joining the roster…  He was originally set to join in the Wizard of Naraka [Book Three] but now might not be joining until book four.  Some of the events in the Tower of Dreams may require another story be told before the planned Gates of Hell story arc, which will still be happening.

The last classic character is Monique.  She get’s her starring role in the Wizard of Naraka.

The picture included on this post is a pencil sketch of the fight between Drake and Quatyl, god of the night sky and reaper of souls.  It will be the chapter illustration for Chapter Fourteen of the Tower of Dreams.