In the summer of 2012, on the hundredth anniversary of one of the most heinous unsolved crimes in American history, we happened upon the sleepy little town of Villisca, Iowa, on our way to Riverside, Iowa to visit the future birthplace of James T. Kirk. 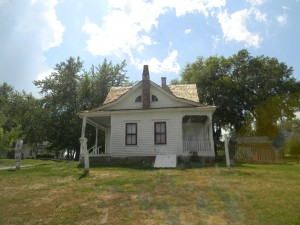 The investigation of one of the “Most Haunted” places in America was an interested excursion into the world of the paranormal.  Some highlights included, the yellow ball my oldest daughter brought to play with the spirits of the dead children in the upstairs bedroom, the dark foreboding feeling that emanated from the attic doorway between the parent’s bedroom and the children’s room upstairs, and the oppressive feeling in the guest bedroom where the two young neighbor girls were brutally murdered 100 years before.

The yellow ball my daughter brought, was placed on the old hardwood floor, and she pushed it out gently to see if anything might want to play with it.  On the video recording it can be seen rolling in a semi-circle around my feet toward the feet of my younger daughter who was severely freaked out by the dark presence in the nearby attic we had to pass to get into the children’s room.  Not liking the direction the ball took, my younger daughter moved the ball away from her with a light tap of her foot, and it rolled back in a similar semi-circular path to my oldest daughter.  There was no apparent warping of the floor, and subsequent rolls resulted in straight destinations.

The dark presence in the attic seemed to still be holding the spirits of the deceased family of five and the two neighbor girls hostage within the small Iowa house.  Even I, a seasoned veteran of many paranormal encounters and combatant of spectral entities, felt no need or desire to enter the attic.  Granted, had I been better equipped I would have had fewer trepidation’s about entering the abode of that evil entity.  What lingered inside that space was full of malice and hate for humanity.  It was never human, even when it claimed the lives of the family that lived there.

The downstairs guest bedroom was scene to some of the best evidence we collected from our visit.  With just my oldest daughter and I doing our investigation at that point in the room, she had laid on the bed and was snapping photos, while I held the digital voice recorder and chatted to the spirits in the house.  What followed was a number of orbs, and a very curious photo of the covered mirror in the room.  On the night of the murders, the perpetrator covered all of the mirrors in the house with blankets.  The owners of the house have replicated that by placing blankets up on the mirrors.  In one series of photos, my daughter caught the spectral image of one of the dead neighbor girls faces reflecting in the mirror.  Now what’s particularly cool about the photo is that if you look closely at it you can see that the image of the face is back in the photo behind the edge of the dresser, seen behind the stuffed animal on the dresser top.  It was not smudges upon the mirror, because many other photos of the mirror did not have this image in it.  Was it the spirit of 12 year-old Lena Stillinger watching my daughter and I?

All in all, it was a fun adventure into the world of the paranormal, and I would recommend anyone traveling through southern Iowa to pay a visit to the quaint little town.  The only thing is, don’t plan on visiting any haunted places on a Sunday or Monday, because all of them are closed.  I think it’s because the Spirit Union has brokered those two days as mandatory days off…